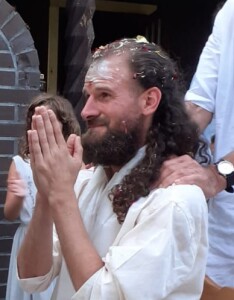 Chaitanya was born in Austria and has been dedicated to Yoga and Meditation practice as well as the transmission of the teaching for more than a decade. A journey into the unknown that took several years had changed his life so profoundly, that henceforth Yoga became the center of his life. During that time he co-founded a Yogacenter in Cusco, Peru, where he lived and taught Yoga for some years. His spiritual quest lead him to the initation into Babaj’s Kriya Yoga in 2014. After 7 years of devoted Kriya Sadhana, longer Tapas periods at the Ashram in Quebec as well as in Badrinath, India, he was inducted into the Order of Acharyas. Currently he lives in Austria with his famliy where he founded a Yoga Ashram called KriyaMandiram. Besides monthly Satsang and weekly Yoga Courses and Group Meditations the Ashram offers regular Silent Meditation Retreats as well as initations into Babaj’s Kirya Yoga.